While the Michigan Union and the Michigan League shared a common goal - to provide students with opportunities for character development and socializing - they pursued it in different ways. The most obvious difference between use of the two buildings was access.  Students themselves established the restrictive practice of not allowing unescorted women through the front doors of the Union - a guard was even positioned there. Women were required to enter the Union through a side door until 1956.  The Michigan Daily made ceremonial note of the change then, with an article by Donna Hanson stating that:

Women have battled and obtained the vote, the right to attend universities, the right to speak even when not spoken to, and now, at long last, the privilege to walk up the sacred front steps of the Michigan Union. There are now no bounds to woman’s progress. [1]

Male students, faculty, and alumni enjoyed the recreation of billiards so much that space dedicated to it had a prominent place in the architects’ designs for the Union.  The billiards room was imagined in colorful detail by the architects and when it opened was occupied beyond capacity.  It was also the last space in the Union to admit women, in 1968. [2] 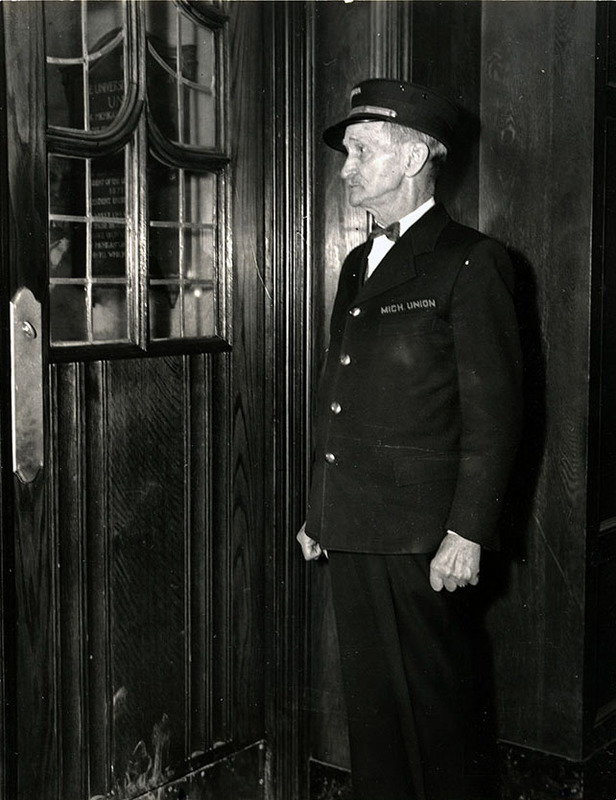 George Johnson, Michigan Union doorman from 1920-45, on guard to prevent women from entering the building.

In their sketches, the Pond brothers envisioned a Union billiards room whose male visitors engaged in both friendly competition and conversation. 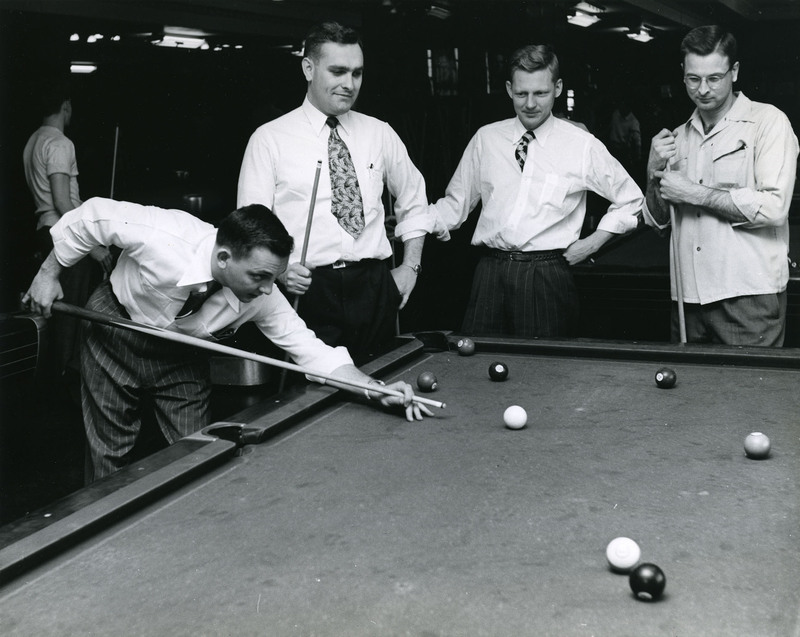 This undated photograph from the Michigan Union records appears to prove the success of their vision. 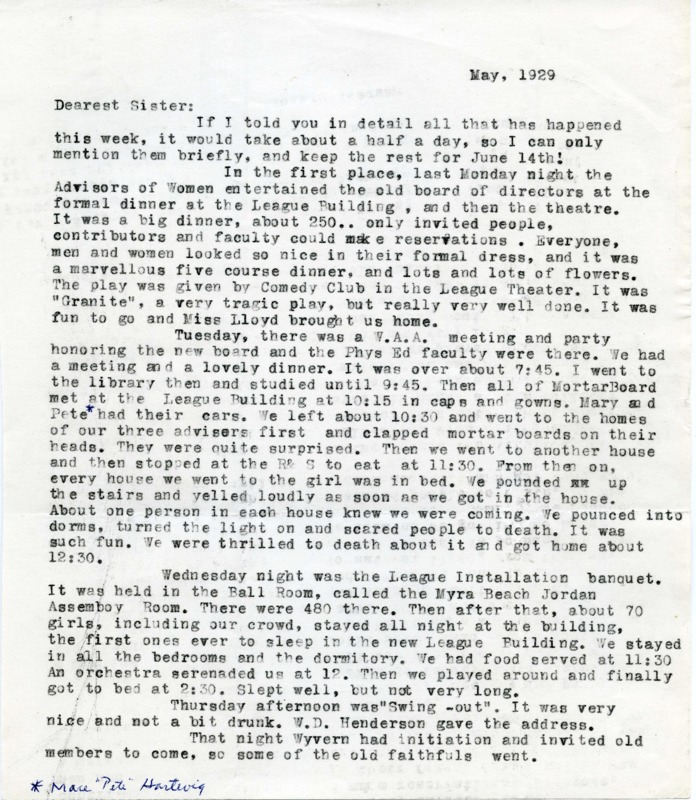 Letter from Jessie Church Wetherell to her sister, 1929; click through for subsequent pages.

For the League, the architects pictured a subtle something [3] that would enable self-direction for women in an era of organization and empowerment.  This vision aligned with that of the Dean of Women, who identified the new building itself with new leadership opportunities for women at Michigan:

We are suffering for leadership; it needs no saying. The leaders of the modern world must be educated—really educated.  True education means training in human contacts with resultant judgment and understanding; it means practice in organized group life. The world needs that women in particular should be so-trained today.  [… ] Give them the chance to come together and they generate the power to master their problems. But to the majority of Michigan women this training is denied at present. [4]

Jessie Church Wetherell's letter to her sister describes the advantages that the newly-opened League afforded female students: attending a play in the League's theater, planning and hosting a fundraising event, or simply playing the piano with friends. She even used one of the League's rooms to compose a part of the letter.

The desire to create social and leadership opportunities for female students were still rooted in the ideals of the 1920s, however.  A bulletin created to support fundraising for the League's construction ties the skills that female students would learn there to their presumed role in the family:

Such a building gives a chance for work in big groups. In this day of organization this is as essential for a woman as for a man, whether she marries immediately or whether she doesn’t. A woman who can not make contacts with her community is not the ideal wife or mother of today. [5] 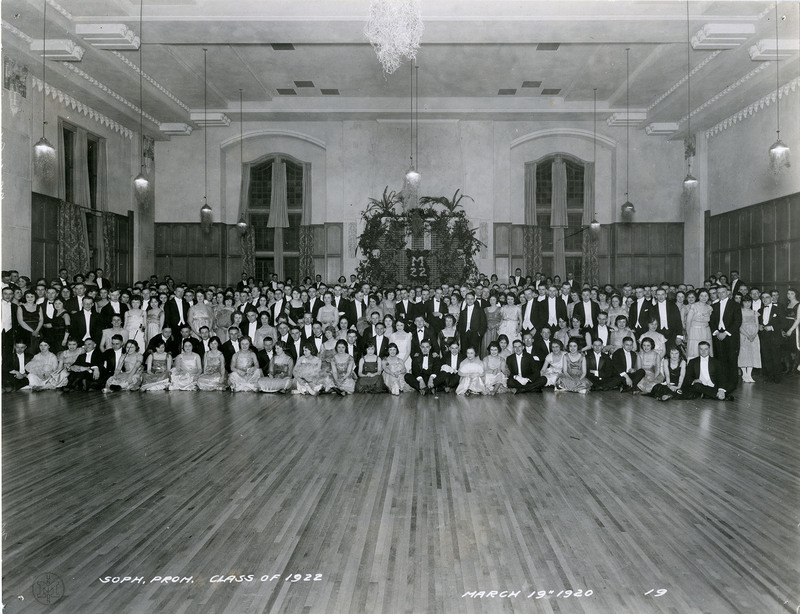 A coed group poses for a photo at the 1920 sophomore prom in the Union. 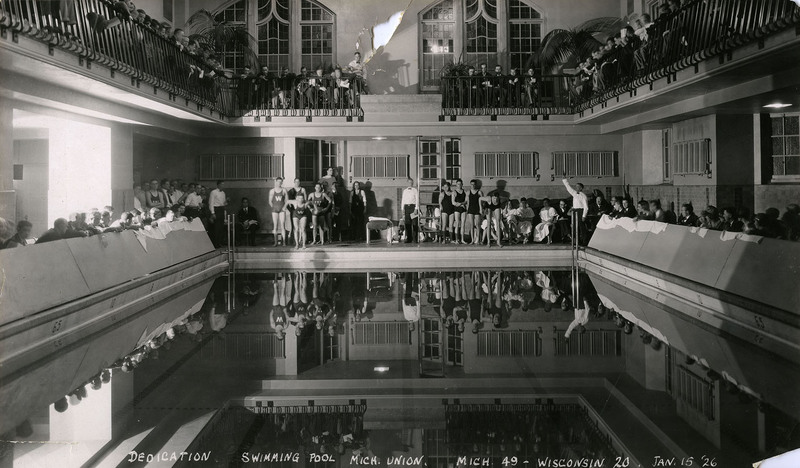 An all-male audience attends the dedication of the Union swimming pool in 1926.

Men did visit the League and women the Union, but often for specific purposes or events.  For example, both men and women were able to make use of the swimming pool at the Union, though at separate times.[6]  The pool proved so popular that when it opened in 1925 over 800 people used it during its first two days. Its filtering system, installed later that year, was considered state of the art, not equalled by any other pool in the country. [7]

Formal dances were among the most memorable coed activities in both the Union and League during their first decades of use.  The architects had anticipated that the dance floor would be of high importance, recommending in their construction documents that it be built of maple and strongly supported. [8] From floor to ceiling, Michigan students designed every aspect of these special events and then dressed their best for what were carefully orchestrated evenings.  Dance cards were among the most treasured memorabilia associated with formal dances at the Union and the League.  They were not only souvenirs; they also served a function as a tiny notebook for listing the partner of each dance.  Women would typically wear them on their wrists, with a pencil attached for convenience. A selection of dance cards - each reflecting the interests of the group that planned the dance - are below.