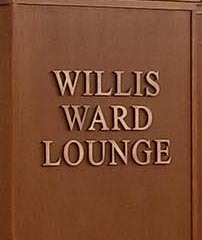 Sign for the Willis Ward Lounge
in the Michigan Union

What is the legacy of Willis Ward and the Georgia Tech affair? How has it impacted the University and its Athletic Department? How has it been remembered and memorialized in the press, academic studies, popular consciousness, and on campus?

At the time and for a number of years after, the Georgia Tech affair was certainly a blemish on the University’s image, particularly among Black alumni and in the African American community. Sports writers in the African American press harshly criticized Michigan for its treatment of Ward and would routinely refer to his benching whenever another Jim Crow incident occurred in college athletics.

But it wasn't only Black alumni who expressed their disappointment. Detroit lawyer William Friedman (LL.B., 1904) wrote to Yost in 1934 that “the treatment of Ward is causing our alumni to hang their heads in shame.”

The Ward story would ebb and flow in campus and popular consciousness. With the passage of time it naturally faded, but an anniversary, inquisitive reporter, or scholarly pursuit might temporarily bring it to light again. It might be revived for political or other purposes by some. Others might prefer it remain hidden.

This section looks at how Ward and the legacy of the Georgia Tech game has been remembered, suppressed, studied, and celebrated: