Gerald Ford and Black and Blue

Ward’s story flickered briefly on the national scene in 1999, when former President Gerald Ford mentioned him in a series of op-eds in support of the University’s position in two affirmative action lawsuits making their way to the U.S. Supreme Court.

University President Lee Bollinger had approached Ford and more than a dozen corporate and academic leaders, asking them to publicize their commitment to affirmative action. Ford was the first to respond, with a New York Times piece titled “Inclusive America Under Attack,” published August 8, 1999.

Ford recounted Ward’s benching and their friendship, and then reflected, “I don’t want future college students to suffer the cultural and social impoverishment that afflicted my generation….Do we really want to risk turning back the clock to an era when the Willis Wards were penalized for the color of their skin, their economic standing or national ancestry?”

The story was revived when President George W. Bush referenced it in his eulogy at Ford’s funeral in 2007. Steve Ford also told the story at the opening of an exhibit at the Gerald Ford Presidential Library in 2006, stating that his father had actually quit the team.

The most recent revival of interest in Ward stems largely from the 2011 documentary Black and Blue: The Story of Gerald Ford, Willis Ward and the 1934 Michigan-Georgia Tech Football Game, produced by Brian Kruger and Buddy Moorehouse. Scriptwriter Moorehouse, a U-M alumnus, member of the Michigan Marching Band, sports editor of The Michigan Daily, and fan for 30 years, stated: “And in all that time, I never once heard of Willis Ward.” After his own discovery, he was determined that every student, every alum, “every person who ever put on a maize or blue T-shirt” needed to know about Willis Ward. With his filmmaker friend Kruger, Moorehouse set out to make a documentary. 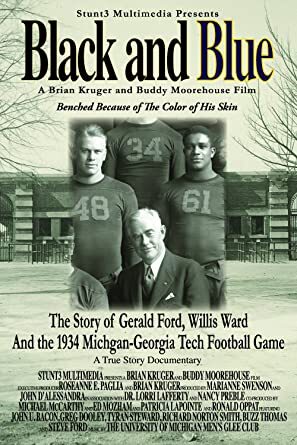 The pair approached the Athletic Department, hoping for cooperation and support. Athletic Director David Brandon was skittish, fearing that raising an ugly racial incident from 75 years ago could only reflect badly on the department and the University. Moorehouse and Krueger pitched their project as a redemption story, one of friendship ultimately overcoming racism, a story that would portray the University in a favorable light as an institution that could confront its own past—a place where a favorite son had demonstrated courage and character that would serve him well later in life.

The film lays out the history of Fielding Yost’s refusal to use Black players, how Ward and Ford came to campus and became friends, and the controversy over the Georgia Tech game. Tyran Kai Steward, John U. Bacon, and other Michigan football historians provide commentary. The story, however, soon becomes much more Ford than Ward. The filmmakers take some liberties with the facts, too readily accepting the accuracy of later recollections of events and somewhat exaggerating Ford’s heroism.

The scene of Ford dramatically telling coach Harry Kipke he was going to quit the team likely never happened. Ward personally convincing Ford to play in the game seems unlikely; Ward does not mention Ford at all in his 1970 interview with John Behee. In another interview, Ward recalled he first heard the story of Ford’s threat to quit from Ford’s half-brother Tom, years later.

While Ward and Ford were certainly friends, Ward's interview with David Pollock suggests they probably did not socialize much outside of athletics. Given the segregated social life on campus in the 1930s, that was probably true. Ward’s 1976 video interview was a key source for the documentary, but given its origin as a political campaign piece, it should have been used more cautiously.

Still, Black and Blue tells a good story and has become the dominant framework for understanding Ward and the Georgia Tech affair. It has been shown repeatedly on public television stations across Michigan and made freely available, along with a study guide, to schools throughout the state. It is regularly screened at the Gerald R. Ford School of Public Policy.