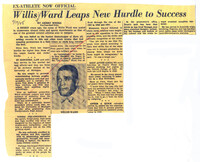 As a lawyer, Willis Ward alternated between public service and private practice while gaining status as a leader within the Michigan Republican Party. After leaving Ford in 1947, he joined the Wayne County Prosecutor's Office, working as an assistant prosecutor for one year before going into private practice. In 1953, he was appointed by the Eisenhower administration as an assistant U.S. attorney for the Eastern District of Michigan.

Ward had always been interested in holding elected office, and his experience as a prosecutor and his personal background made him an appealing candidate. In 1956, taking leave from the U.S. Attorney’s Office, Ward ran as the Republican candidate for the U.S. House of  Representatives for the Thirteenth District. His opponent was first-term Democratic Rep. Charles Diggs Jr., the first Black congressman elected in Michigan. 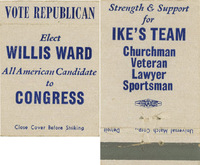 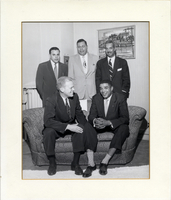 The race was the first in the state to have two Black candidates as the parties’ nominees. Diggs was an outspoken civil rights leader in Michigan and nationally, but Ward was critical of Diggs's strong focus on civil rights, arguing that other issues important to constituents were not being addressed.

In 1956, the Thirteenth Congressional District included parts of Detroit and Wayne County, and was a reliably Democratic seat. Despite this history, the Republicans hoped that President Eisenhower’s reelection bid would help down-ballot candidates such as Ward.

Other Republican officials came to Detroit to help his campaign, including Ward's former Michigan football teammate Gerald Ford, who had been elected to the U.S. House from West Michigan’s Fifth Congressional District in 1948. Nevertheless, while Eisenhower won Michigan, Democrat Adlai Stevenson took Wayne County and Ward lost badly; Diggs sailed to reelection with 70 percent of the vote.

Ward returned to his position in the U.S. Attorney’s office, and in 1959, he was promoted to the head of the Eastern District’s Civil Division. In 1961,  he left to go into private practice with William Patrick, the first Black member of the Detroit City Council.

Although unsuccessful as a congressional candidate, Ward continued to be involved in the State Republican Party. In 1964, he was named by Governor George Romney as an inaugural member of the Board of Trustees for Northern Michigan University, designated a university just the year before by the state legislature. He served in this role for two years and the school later awarded him an honorary Doctorate of Humanities in 1970.

In 1966, Romney appointed Ward to an open seat as the Republican representative on the three-person Michigan Public Service Commission, the state regulatory agency for public utilities. He was the first Black commissioner on that body. Ward had good connections in this area; his previous law partner, William Jackson, had left the Detroit City counsel office to work in the legal office of the Michigan Bell Telephone Company. Ward became chairman of the commission in 1968.

In 1973, Ward was appointed by Gov. William G. Milliken to an open seat on the Wayne County Probate Court, and the next year he was elected presiding judge by his peer jurists.

Judge Ward oversaw some contentious cases, including the final partition and distribution in 1980 of the trust of John F. Dodge, the elder brother of the Dodge Brothers motor company, whose heirs had fought over claims to the estate since his death 60 years prior. Ward served as a judge until his death in 1983.