Ward and the Athletic Department 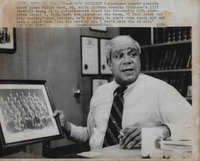 While deeply disappointed and disillusioned at the time, Ward did not allow the Georgia Tech affair to consume him. He moved on with his career at Ford, as a lawyer, and in politics, rarely, if ever, discussing his experience in public. He would frequently attend U-M football games and track meets, participate in M Letterwinners Club and alumni events, and remain a lifelong supporter of the University.

In his run for Congress, Ward's status as a star athlete at Michigan was certainly part of his campaign bio, but he did not dwell on it—and certainly not the Georgia Tech affair. The issue may have cut both ways: garnering some sympathy as a victim of racial injustice, but possibly reviving claims that he should have quit the team or taken a more militant stand in protest.

Ward would eventually sit for three oral history interviews—with Owen W. Bombard for the Ford Motor Company Archives in 1955; John Behee in 1970; and David Pollock in 1985. His first major public discussion of the Georgia Tech incident came in an interview videotaped for Gerald Ford’s 1976 presidential campaign.

While there is no question that Ward’s friendship with and support for Ford was genuine, it was also politically convenient. As congressman from a conservative West Michigan district and Republican minority leader of the U.S. House, Ford’s record on civil rights was mixed. It was in this interview that the story of Ford’s supposed dramatic threat to coach Kipke to quit the team is first told—a story that would presumably help Ford’s image in the African American community. Ward had not mentioned such a threat from Ford in his interview with Behee.

Ward was inducted into the University of Michigan Hall of Honor in its fourth induction class, in 1981. He was the fourth African American athlete so honored, after Cazzie Russell in 1978 (basketball 1963–1966), Bill Buntin in 1980 (basketball 1962–1965), and Eddie Tolan in 1980 (track 1928–1931, two gold medals at the 1932 Olympics). His brief biography in the banquet program makes no mention of being barred from the Georgia Tech game.

Responding to a public campaign to honor Ward, the Athletic Department designated the October 20, 2012, Michigan State game as Willis Ward Day at Michigan Stadium, 78 years to the day after Ward was benched for the Georgia Tech game. A tribute video was played on the stadium scoreboard and the game program included a feature story on Ward.

Athletic Department Sports Information Director Will Perry’s semi-official history, The Wolverines: A Story of Michigan Football, was published in 1974. Ward is mentioned in discussion of the 1932 and 1933 national championship seasons. The dismal 1934 season is dispensed with in a couple sentences, with no mention whatsoever of the Georgia Tech game.

One of the immediate practical consequences of Ward’s benching was the loss of a star football prospect—Bernard Jefferson, all-state fullback and basketball star at Ottawa Hills High School in Grand Rapids, Michigan. An April 1934 Grand Rapids Herald profile reprinted in the Chicago Defender said Jefferson “looks up to Willis Ward, the University of Michigan’s great athlete as his idol. He aspires to follow Ward’s athletic footsteps at the University.”

After the Georgia Tech affair, Jefferson decided to enroll at Northwestern, fearing he would not have had the support of his coaches at Michigan. He had a stellar football career at Northwestern, but the “gentlemen’s agreement” kept him off the Wildcat basketball team.