Considering Ward’s presence on the team and the well-known existence of the “gentlemen’s agreement,” as well as the fact that U-M had not played a southern school since 1923, one question underlying the whole “Georgia Tech affair” is simply this: Why was Georgia Tech on the 1934 schedule?

Some authors have suggested Athletic Director Fielding Yost, knowing that Ward would not be allowed to play, purposely scheduled the southern school as a way to punish coach Harry Kipke and humiliate Ward. Another version maintains that Yost simply “forgot” or didn’t realize that Ward’s name on the roster would be a deal-breaker for a school committed to segregation. The former seems too cynical, the latter too naive.

A better explanation may be that it resulted from a scheduling problem largely of Yost’s own making and a belief that he would be able to tamp down and control any controversy that might result. 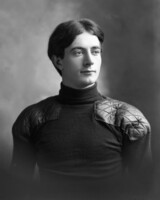 Michigan did not have much history playing southern schools. Yost-led teams hosted Kentucky, Tulane, and the Quantico (Virginia) Marines once each; played a home-and-home series with both Navy and Princeton (southern in attitude if not geography); and faced Vanderbilt nine times—with three of the nine games played in Nashville. Vanderbilt coach Dan McGugin was a star on Michigan’s 1901–1902 teams and also happened to be Yost’s brother-in-law. Plus, Yost lived in Nashville until 1921, residing in Ann Arbor only during the football season. In effect, Vanderbilt home games were home games for Yost.

Since no African American players saw game action during Yost’s tenure as coach, the race question did not arise in these contests with segregated schools.

Following national championship seasons in 1932 and 1933, Yost was eager to add a prominent eastern team to the 1934 schedule. With one open date to fill, November 17, Yost had his sights on the University of Pennsylvania and was willing to shift games around to accommodate the Quakers.

At the same time, Yost and Ohio State Athletic Director Lynn St. John had agreed in principle to move the Michigan–Ohio State game from its traditional third Saturday in October to the last game of the season. The change had repercussions for other schools—in particular Illinois, which agreed to give up its season-ending game with the Buckeyes. At the May conference scheduling meeting, however, Yost would not finalize the Ohio State flip, wanting to keep some flexibility in dealing with Penn.

Finally, on October 3, 1933, St. John gave Yost an ultimatum. A final appeal to Penn failed. Yost now had a gaping hole in his 1934 schedule and the prestige teams he coveted were no longer available. He frantically explored options. McGugin was offered a game, but Vanderbilt’s schedule was set. However, McGugin did suggest a couple of other suitable southern teams. 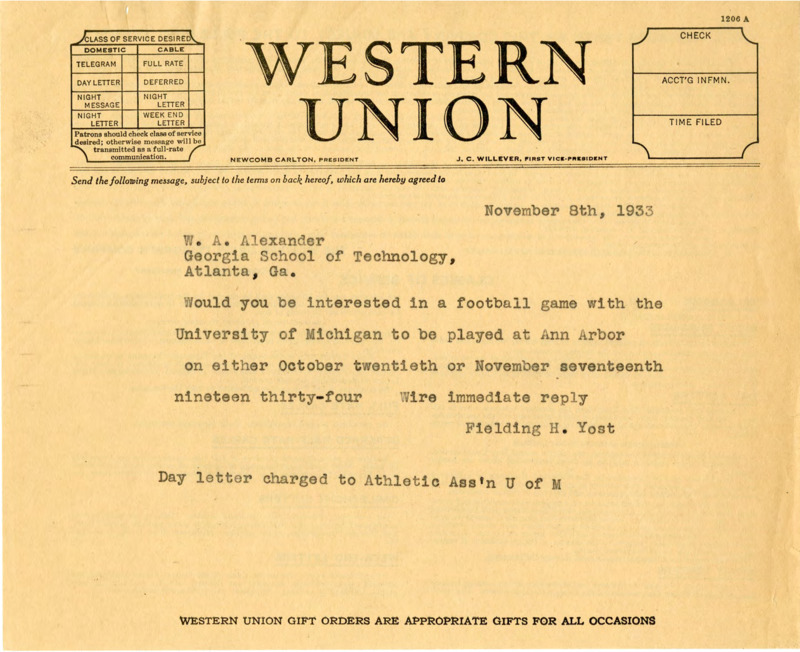 Telegrams flew into and out of Yost’s State Street office from November 8–11. An offer was made to Florida and tentatively accepted. Another went to William Alexander, coach and athletic director at Georgia Tech:

Would you be interested in a football game with the University of Michigan to be played in Ann Arbor on either October twentieth or November seventeenth nineteen thirty-four. Wire immediate reply.
Fielding H. Yost

Alexander replied that evening that he was attempting to clear the Tech schedule for October 20th. On October 9, Yost wired the basics of the financial terms. On October 10, Alexander replied, “October twentieth nineteen thirty-four cleared. Happy to accept for that date. …”

So, the game was set, except for a minor technicality on Michigan’s end. The Board in Control of Intercollegiate Athletics would need to approve the contract—which it did without comment at its meeting on December 6, 1933.

If, in the rush to get a game, Yost did “forget” about the problem posed by Georgia Tech's racist policy, McGugin, Alexander, and Georgia Tech Faculty Representative A.H. Armstrong quickly reminded him of it. If Yost thought he could manage the issue by not responding publicly, or that any protest could be averted by his own popularity or force of personality, an incipient firestorm over whether Franklin Lett, a freshman African American football player, would be allowed to play basketball should have warned Yost otherwise.