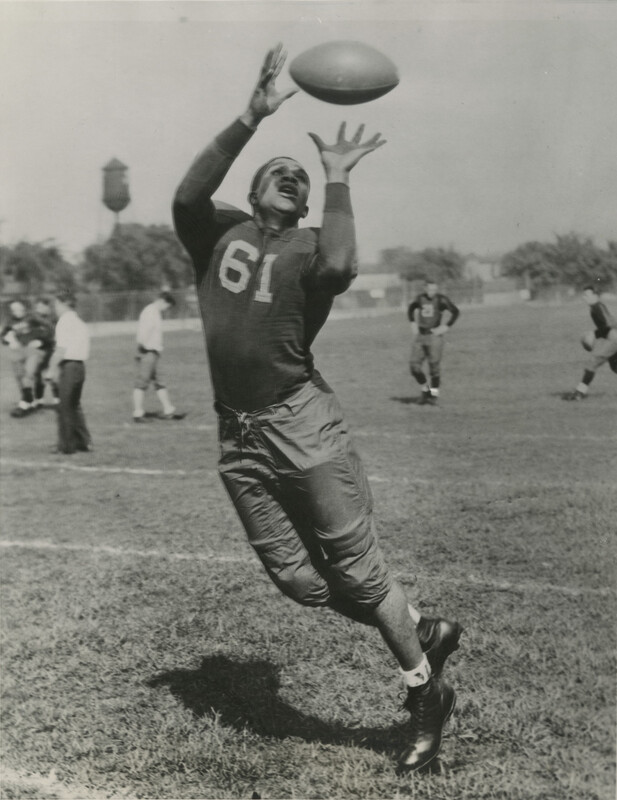 Willis Ward is indelibly identified with the October 20, 1934, University of Michigan vs. Georgia Tech football game in Ann Arbor—a game in which he did not play, and a game for which he was infamously benched for being Black.

The game had been scheduled a year earlier, despite the well-known Jim Crow custom referred to as the “gentlemen’s agreement,” under which schools in the American South demanded that any African American players on an opposing school’s roster be held out of the game. From the time of the game's scheduling, Georgia Tech insisted that Ward, Michigan’s best player, could not play. Michigan acquiesced. The benching of Ward provoked protest on campus and drew national attention.

However, exclusive focus on this single game obscures Ward’s interesting and complicated life and legacy. At times Ward was a pioneer, breaking new ground for African Americans. At other times, he was conservative and accommodationist.

This exhibit offers some new insights and detail on events surrounding the Georgia Tech game, and explores Ward’s life beyond that notorious incident.

Each section provides an overview and the opportunity to explore a more in-depth account.

Ward at a Glance

Willis Franklyn Ward was born December 28, 1912, in Birmingham, Alabama, the youngest of seven children of Henry R. Ward and Nettie Belle Sanders. He would make his way to Detroit, Michigan, around 1918, as part of the Great Migration of African Americans out of the Jim Crow South to the job opportunities in the industrializing cities of the North. Detroit, and in particular Henry Ford’s auto plants, was a major destination for African Americans.

As a teenager, Ward would become a star student and athlete at Detroit's Northwestern High School and then at the University of Michigan, where he broke the color barrier in football and gained national recognition in both football and track and field.

After graduation, he worked for Henry Ford’s controversial aide Harry Bennett in the Personnel Department of Ford Motor Company for more than a decade, while putting himself through the Detroit College of Law at night. Ward passed the Michigan bar examination in 1947 and began working in the Wayne County Prosecutor’s Office before entering private practice.

In 1953, he was appointed an assistant U.S. attorney for the Eastern District of Michigan, eventually becoming head of the district's Civil Division. He was active in Republican Party politics, including a failed 1956 run for U.S. Congress. Ward returned to private practice in 1961 and was later appointed to the Michigan Public Service Commission and the Northern Michigan University Board of Trustees. He finished his public career as a probate judge in Wayne County.